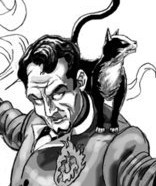 Dr. Sunn is a character that I created for a story in The Hero Chronicles. Here's a little preview of the character.


Dr. Michael Sunn, a prominent Boston psychiatrist, is one of the most respected in his field. After a tragic accident that took the lives of his wife and daughter, Sunn, became obsessed with speaking to their spirits and finally saying good bye. It was that dark and twisted path that led him to a mysterious group of mages. They taught Sunn how to unravel and control the mystical energies of the universe.

Dr. Sunn, along with his companion, Romero the cat, has made it his life’s mission to defeat the supernatural evil that preys upon the innocents. Those that live in the dark should be very, very, afraid.